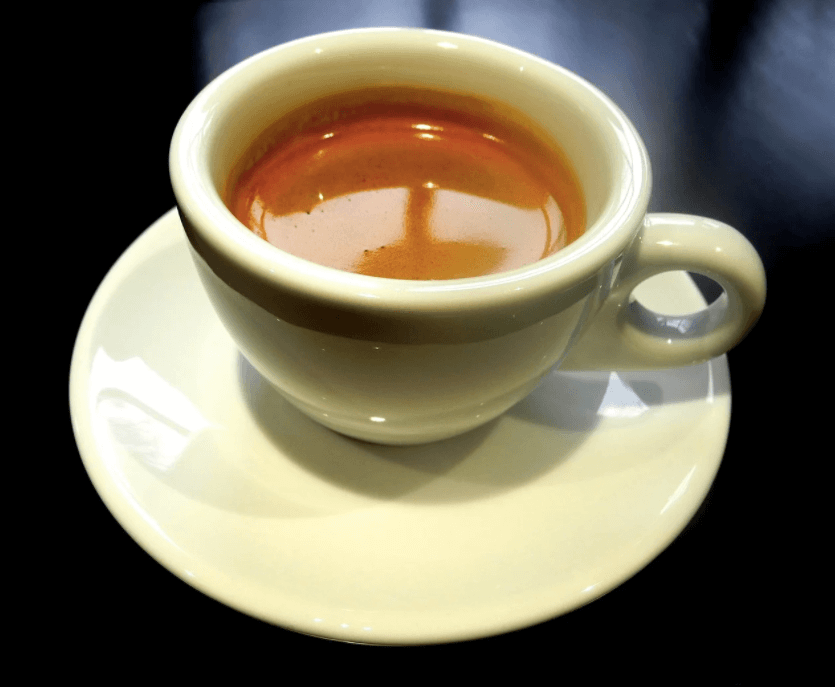 Have you been awestruck by the wide varieties of coffee in the menu a shop can offer? It is rather confusing if you cannot differentiate which one has what flavor. In the beverage list, there is lungo, one of the espresso-based drinks.

People often confuse it with other types of coffee drinks. Now, say goodbye to all the confusion because you are going to read all about lungo. From the definition down to the recipes, this page will disclose everything. Read on!

Lungo is derived from Italian, which means ‘long’ in English. The coffee drink is named after it due to the making process, which requires ‘long pull’, terms for slow and enormous extraction.
If regular espresso needs a 1:2 ratio for a shot and water, lungo doubles the amount of water.

How to Make It

It is an easy job to make a cup with an espresso machine. Most of the said gears are designed with a specific button to make this beverage. Nonetheless, here is the guide to make one.

You will need an espresso machine, ground coffee beans, filtered water, and a tamper. 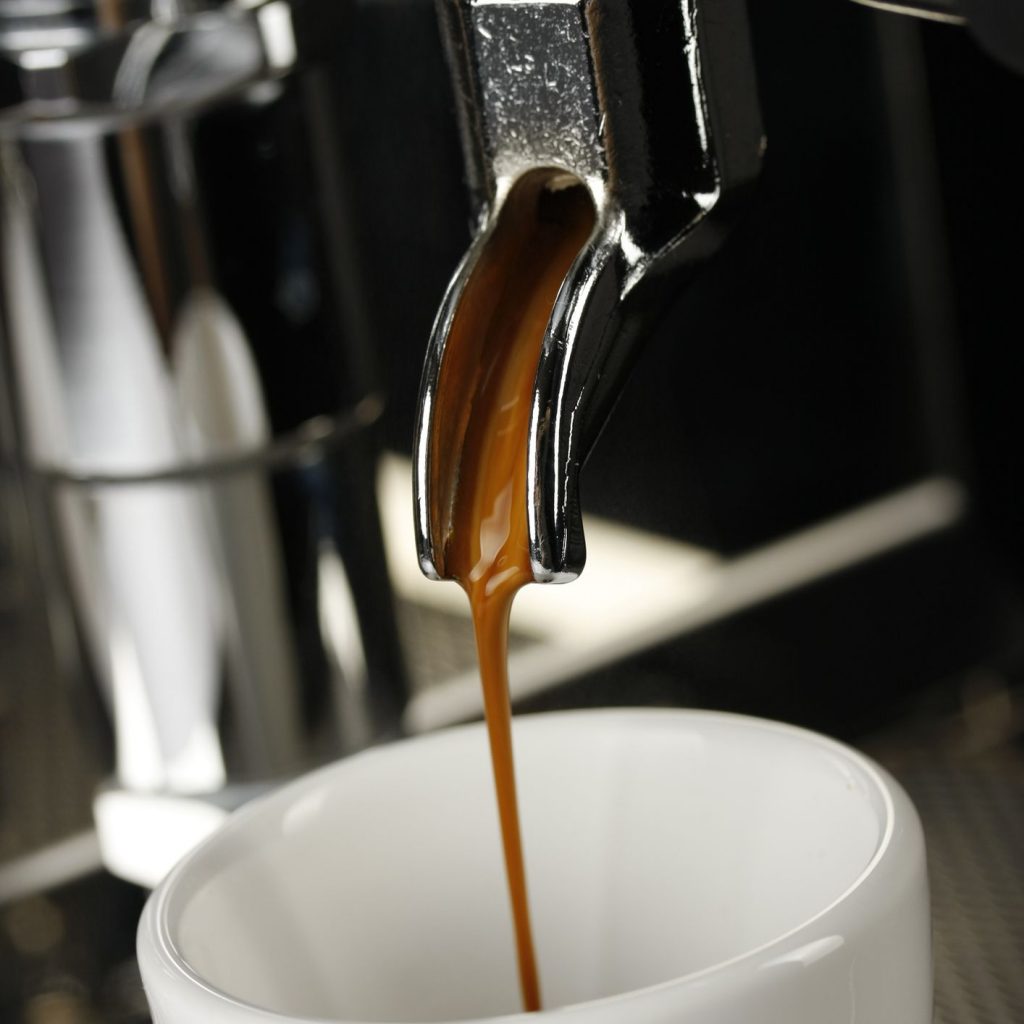 Since espresso and water are involved in the making process, I bet you can pretty much assume how it tastes.

It has the bold and rich taste of that a regular espresso but lungo is more watery, less strong, and bitterer. The bitter flavor is gotten from the longer time of extraction. Coffee drinkers who prefer simple, less sweet flavor with larger sizes will adore this beverage.

The Difference between Lungo and Other Similar Drinks

As stated previously, people often confuse lungo with other similar coffee types, such as Americano, long black, ristretto, latte, and doppio. Here is the difference. 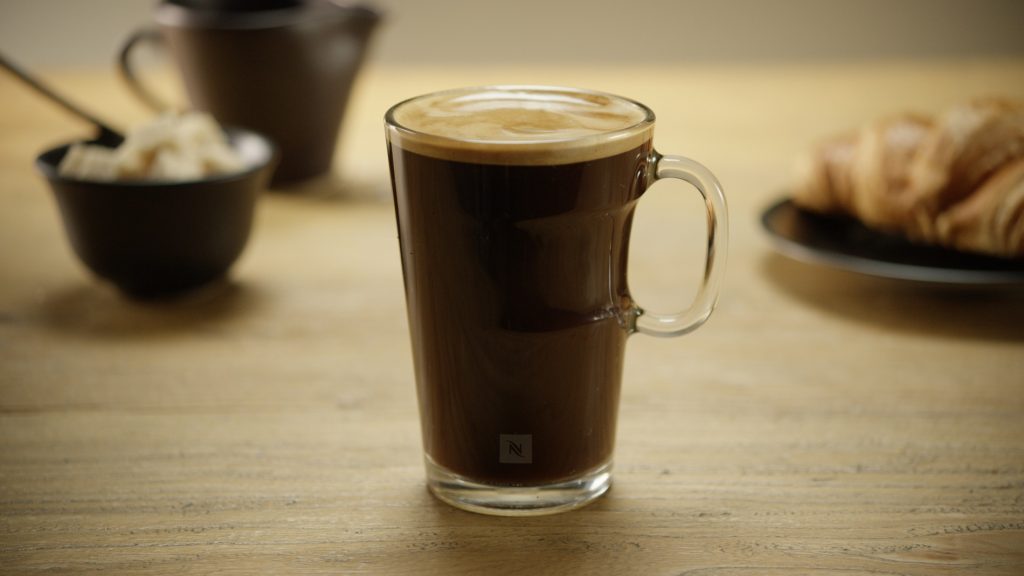 Americano appears similar to lungo, not to mention they often served in similar glasses as well. However, they taste different. This beverage is made by pouring hot water over an espresso shot or two, without caring about ratio and the exact amount. 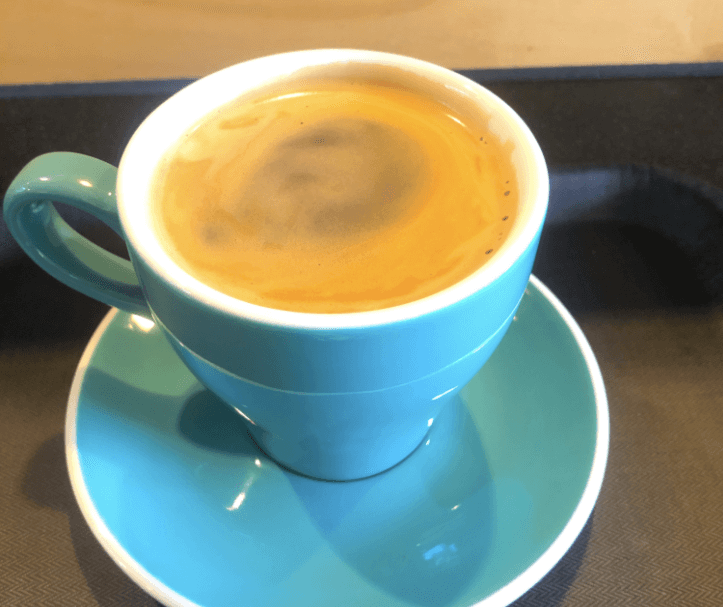 A long black is the reverse version of Americano. It is made by pouring an espresso shot over hot water and tastes less bitter than a lungo. 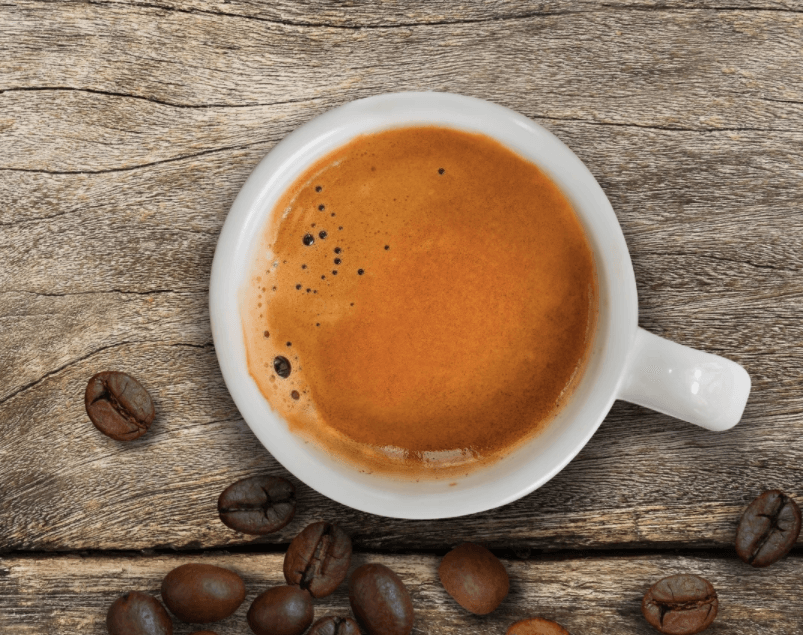 It is another variant of espresso-based drinks. You can tell ristretto apart from lungo by the amount of water needed in the making.

While lungo doubles the water amount from how much it is needed to make a regular espresso, ristretto decreases it. You can roughly assume that a cup of it needs a 1:1 ratio for espresso shot and water. 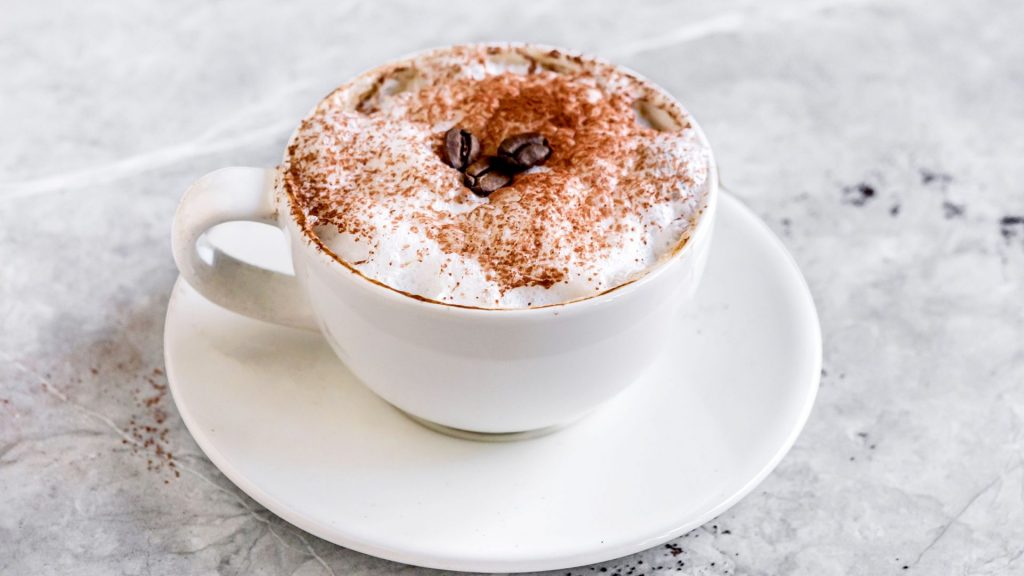 People often mix up latte and lungo due to their name, not because of their appearance and taste. They are similar in requiring espresso shot in the making process, but then latte adds steamed milk and foam, which make it tastes sweet. 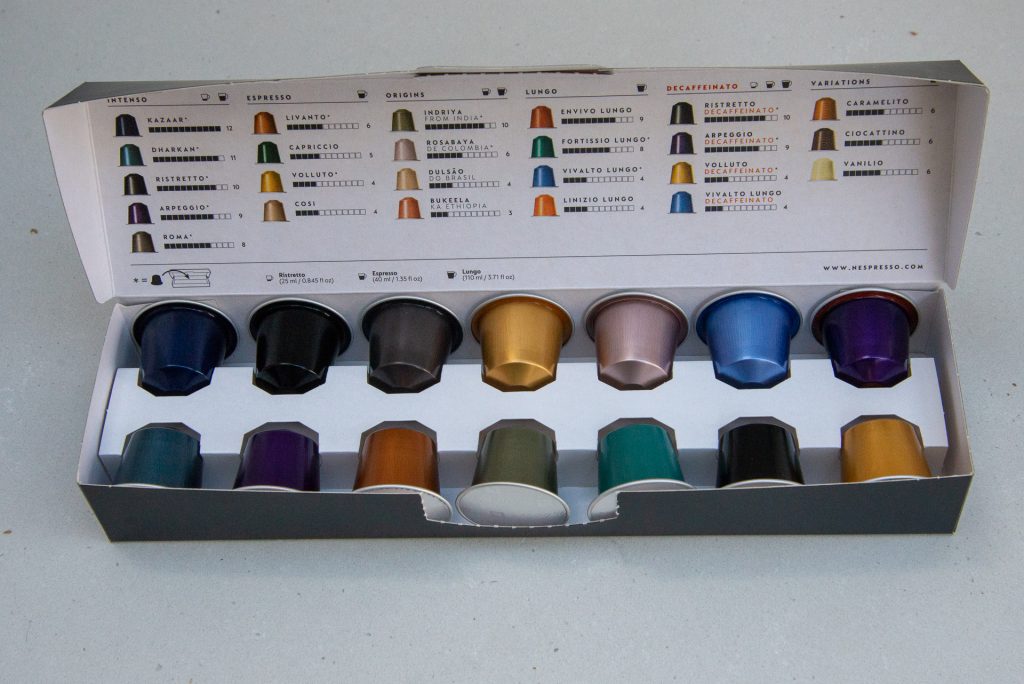 Nespresso, the world-renowned brand for coffee products, has launched Lungo Grands Crus for you in capsules. Each capsule fits a portion of a long cup, around 110 ml. They are Fortissio Lungo, Vivalto Lungo, and Linizio Lungo. 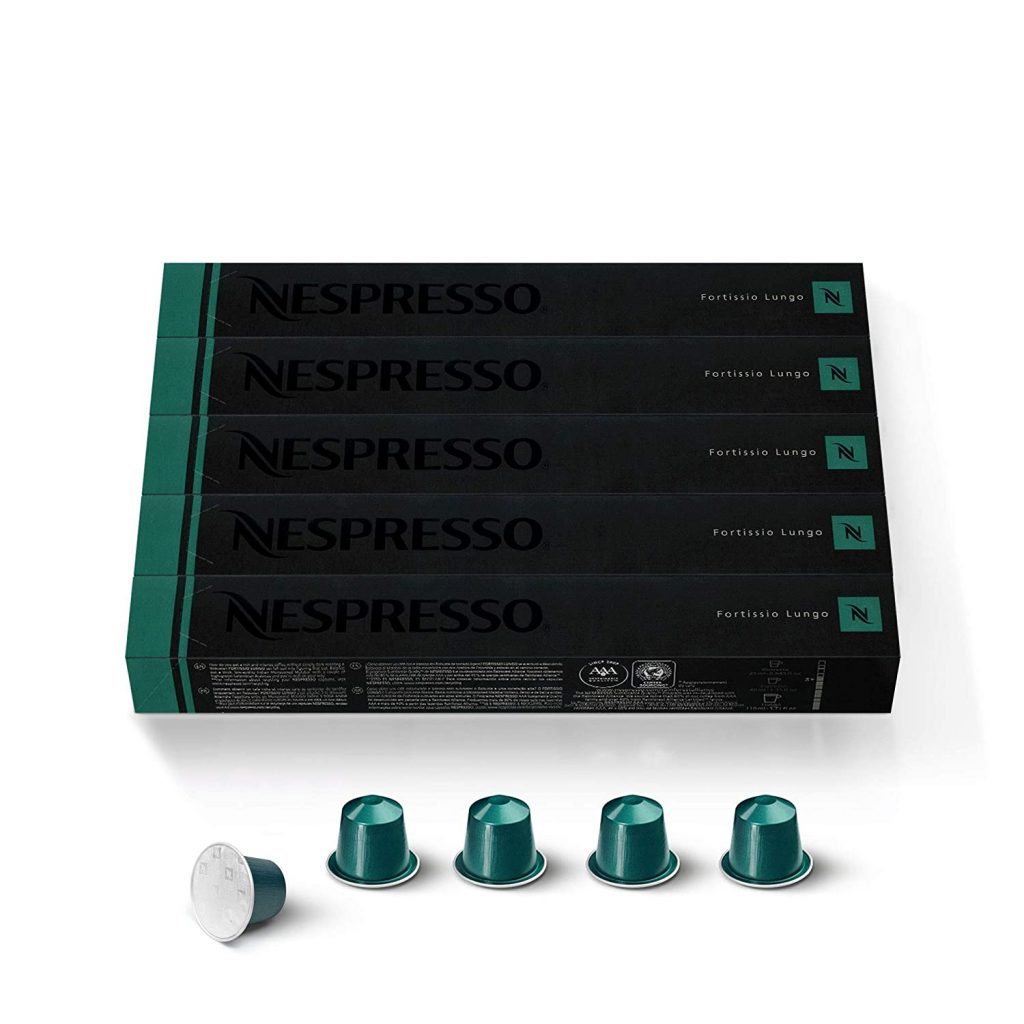 Nespresso claims Fortissio Lungo to be rich in aroma and full-bodied. Blending two kinds of Arabica beans, which are Indian Malabar and Latin American, they create a strong character of lungo.

There are hints of malty toast and sweet cereal aromas in every cup, makes it perfect to accompany you conquer all mornings. Besides, its bitterness pleasantly greets your taste buds with its soft and round texture. 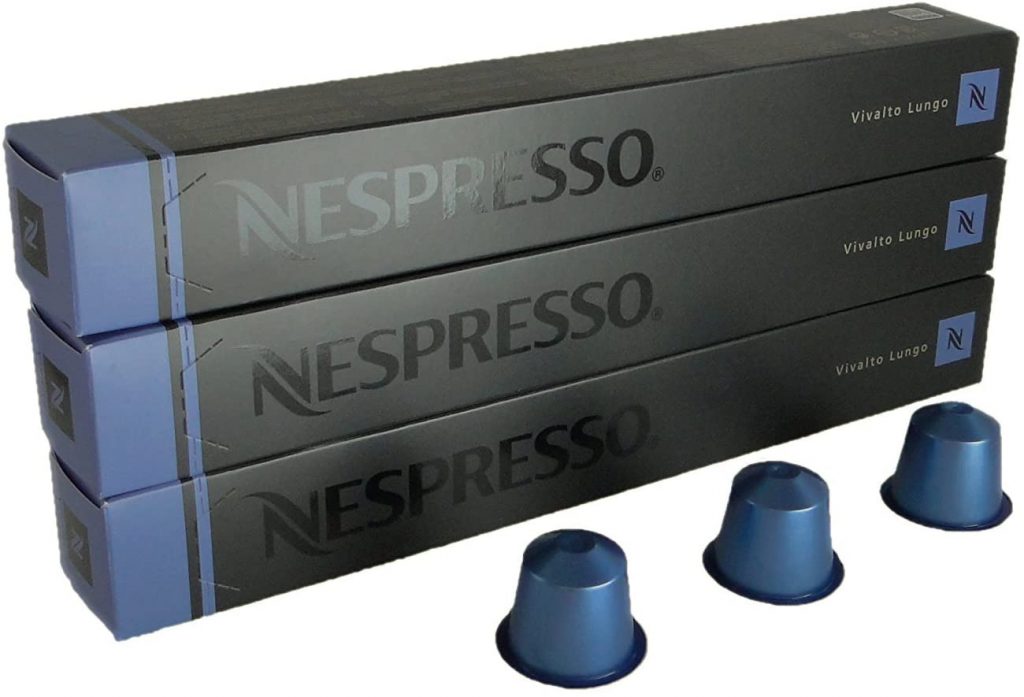 Vivalto Lungo is created by marrying Cerrado, a variety of Arabica from South America, with that of East Africa. It is said to be balanced and complex that mixes slight floral and roasted notes. The beans split roasting augments the specification of each origin. 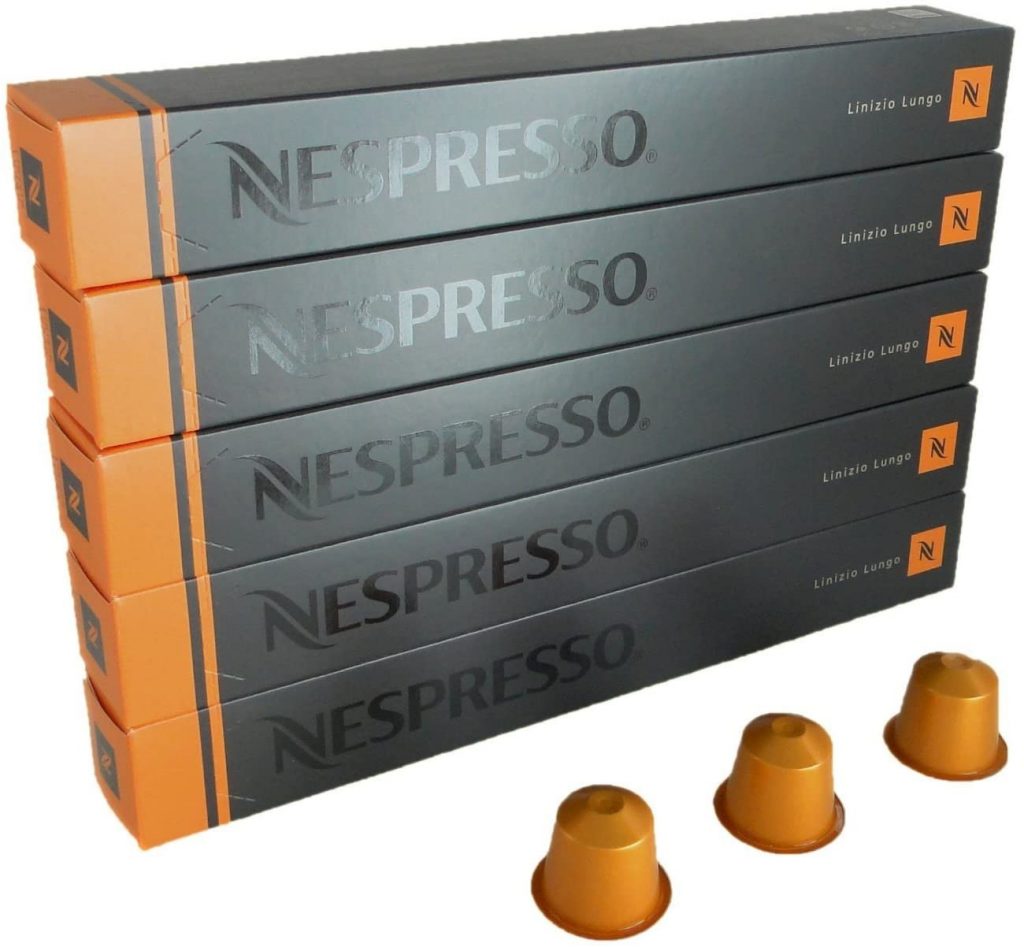 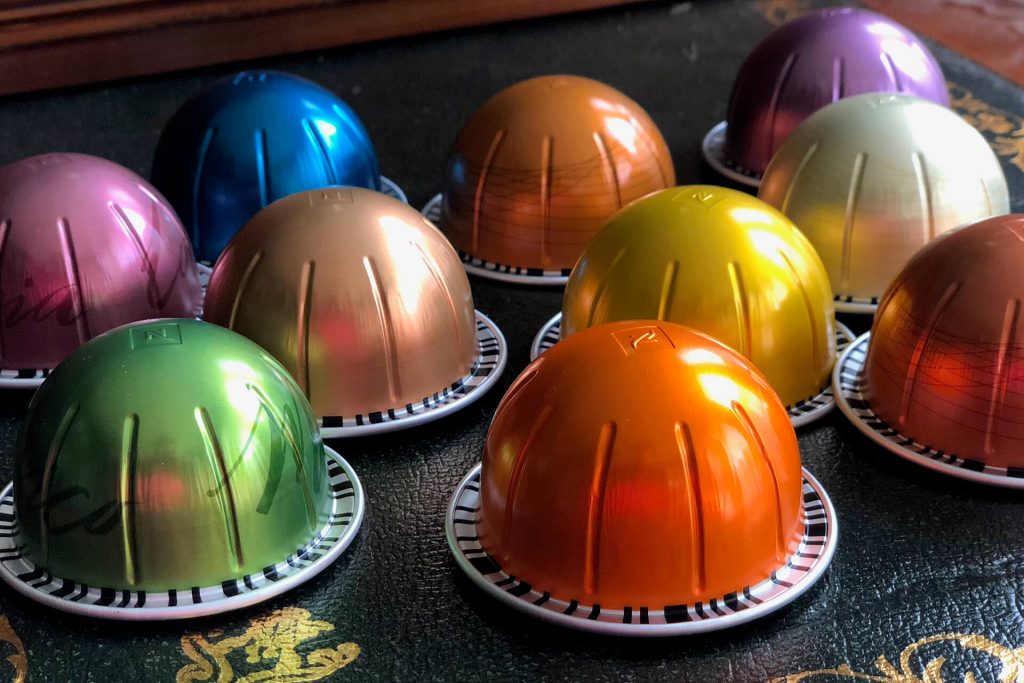 Besides Lungo Grands Crus, Nespresso also has Gran Lungo, a series of bold blends that fit a bit longer cup of 5 oz. Their intensity level range from 4 to 8. They are Fortado, Arondio, Aflorazio, and Decaffeinato Ontuoso. 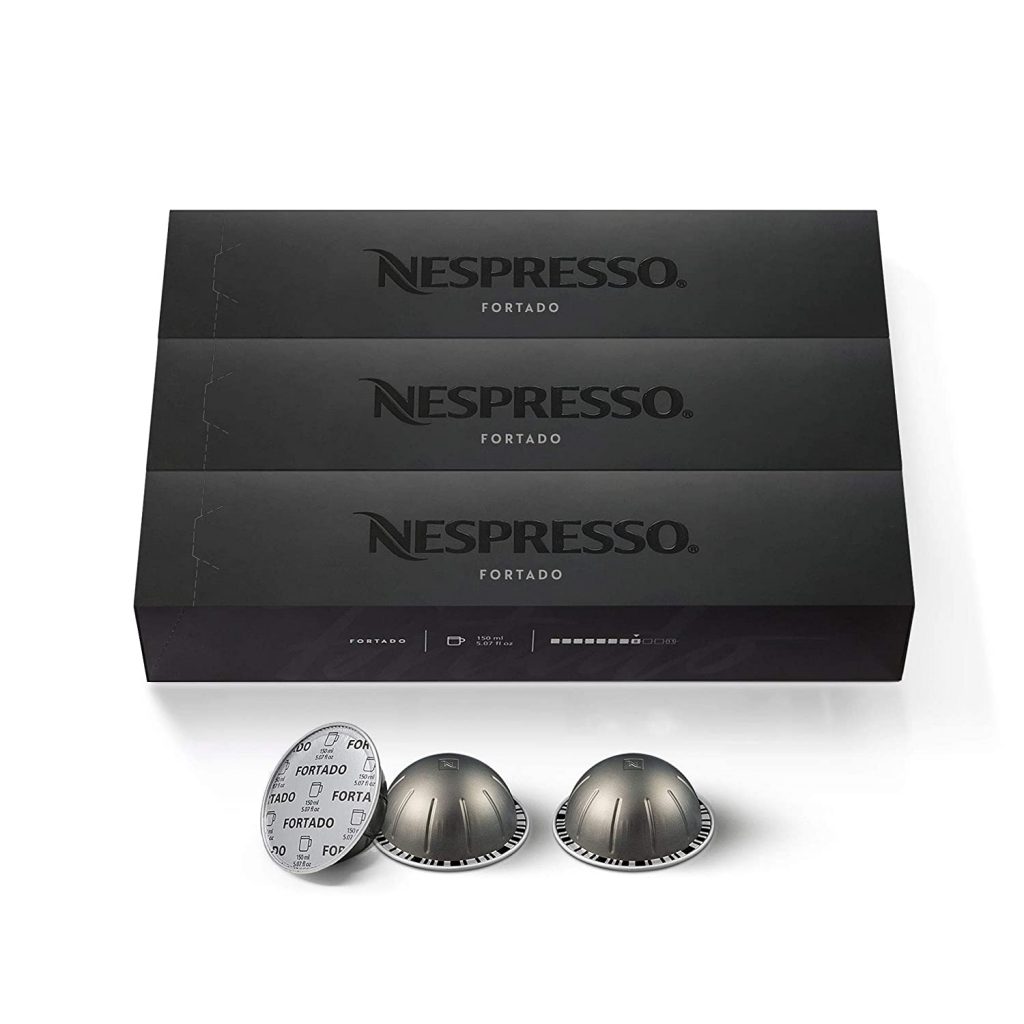 It is the most intense in the group. Unlike the Grands Cruz, which involves only Arabica varieties, Nespresso makes Fortado by blending Robusta (Indian) and Arabica (South American and Central American).

When sipped, Fortado lets out the bitter cocoa flavor and oak wood aroma as the highlight of this coffee’s richness. If added with milk, it keeps its intense character while augments the chocolate notes. 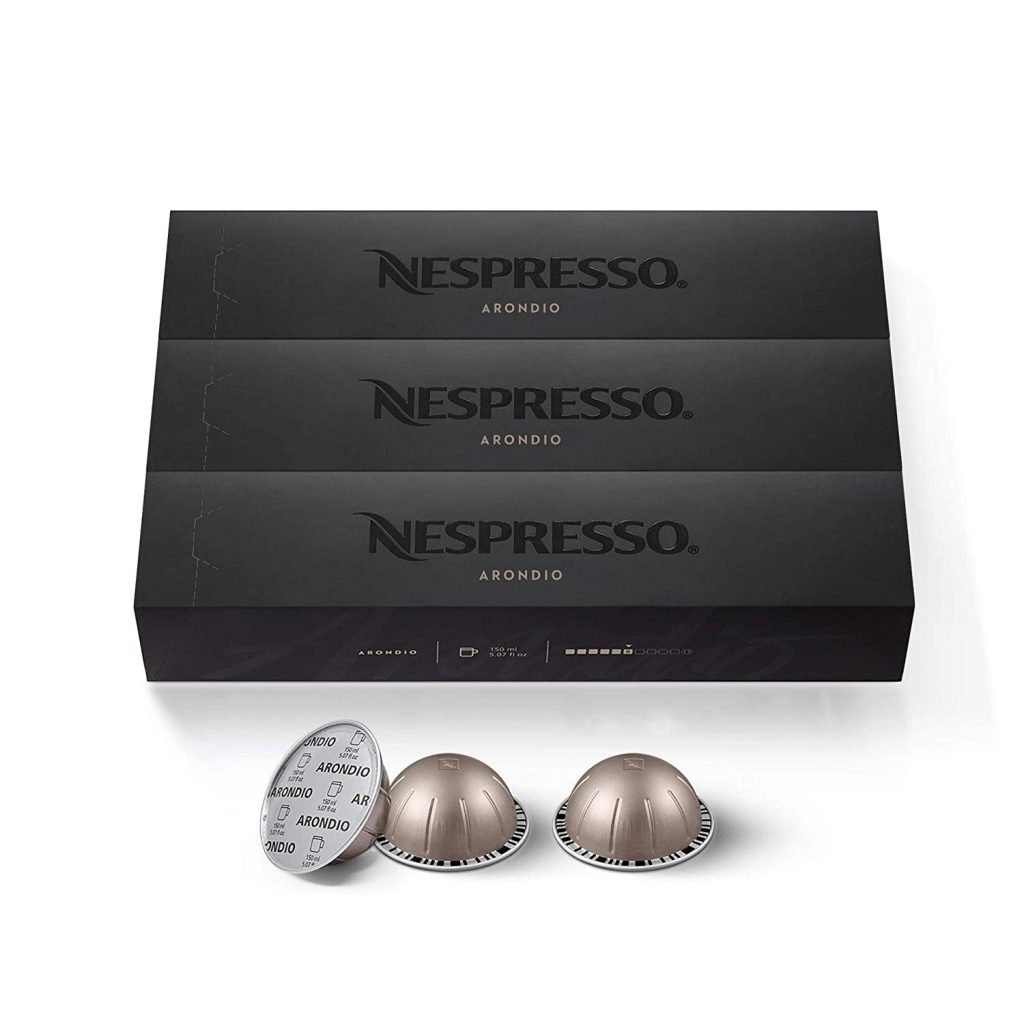 Nespresso blends Guatemalan Robusta and Colombian Arabica in the invention process of Arondio. They then find a perfect medium roasted blend with specific cereal flavor. The slight acidity makes you awe when sipping this delicate coffee.

It is less intense than the Fortado. If it is enjoyed with milk, the cereal flavor is lessened but the character is intact. 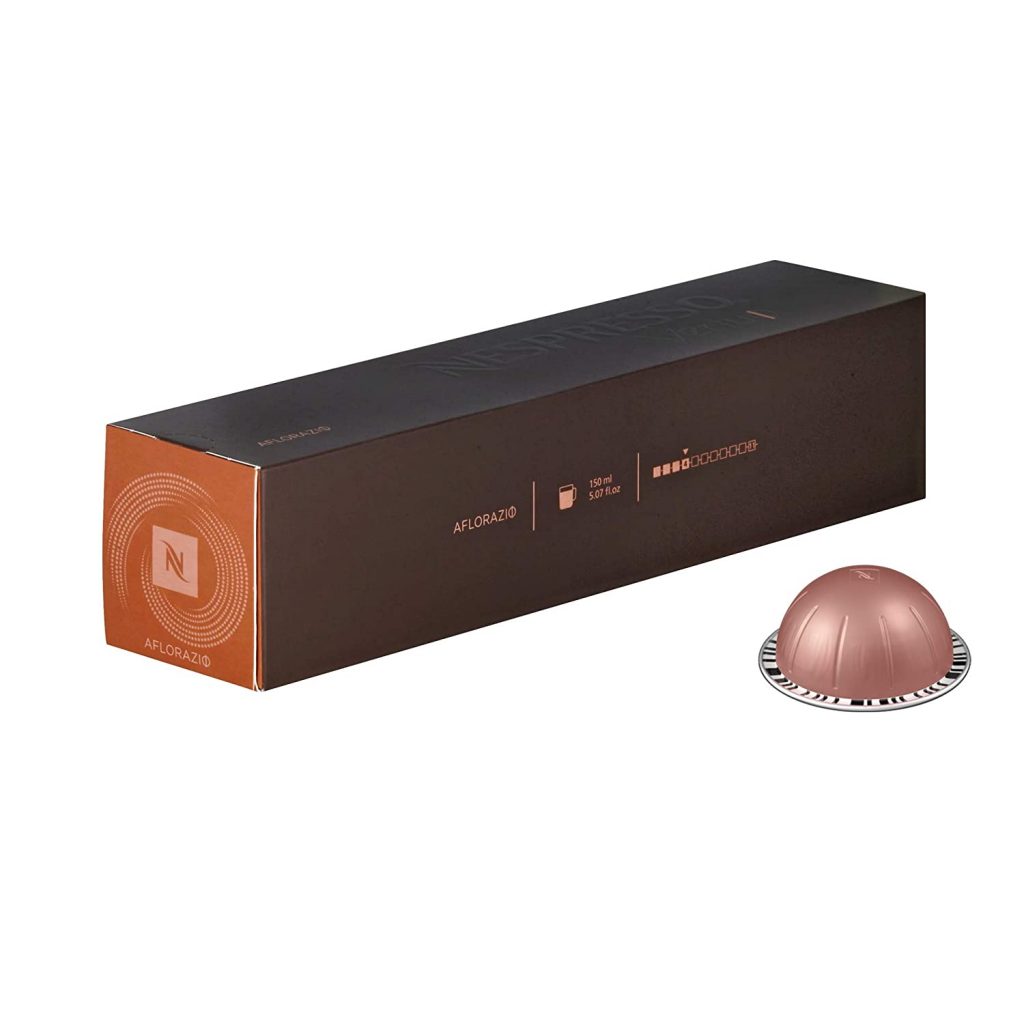 Aflorazio is the typical Arabica from East Africa with blueberry flavor and flowery aroma. It is the least intense in the group. It lets out a hint of musk when savored.

If it is enjoyed with milk, the notes of flowery and blueberry are increased and the coffee tastes much better. 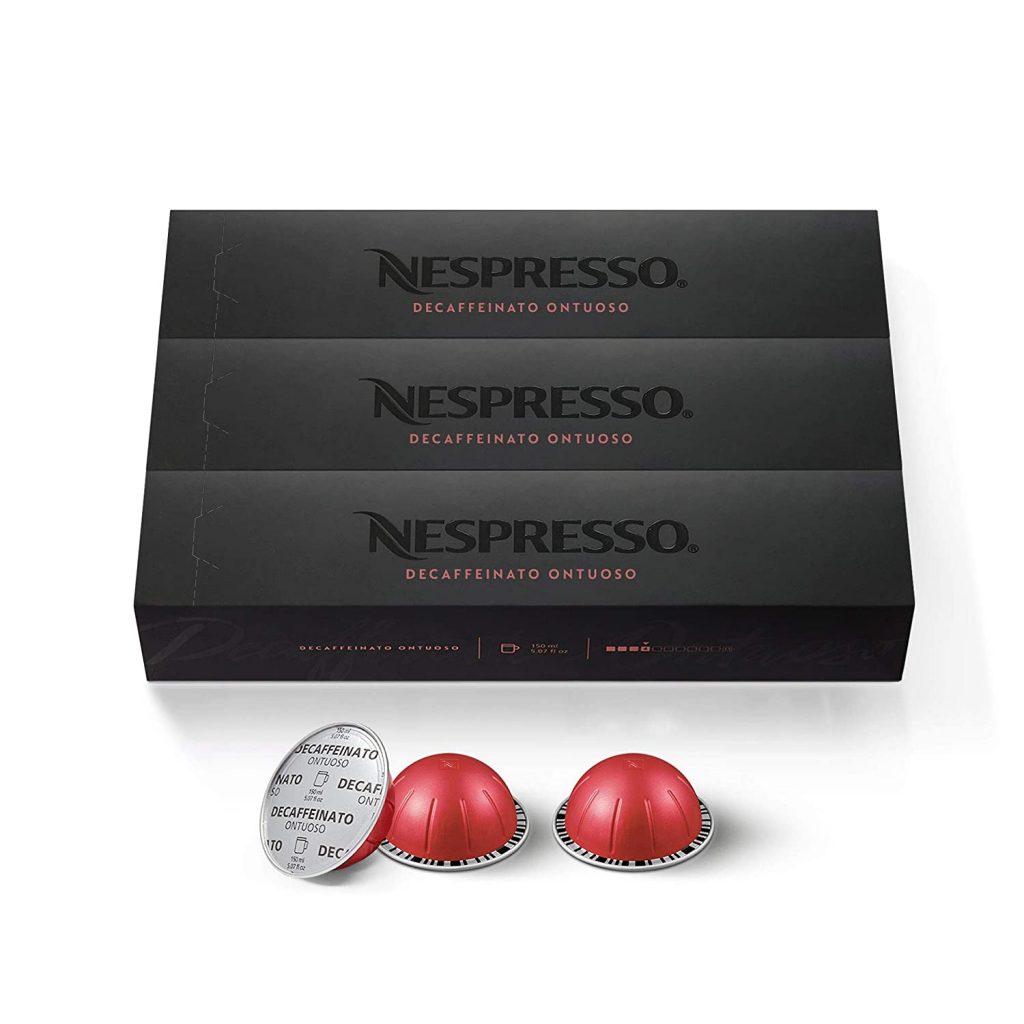 It belongs to the least intense as well in the group. Made from a blend of Colombian and Brazilian Arabica, Decaffeinato Ontuoso has the vivid notes of malted cereal. If added with milk, you can notice a familiar sweet taste of caramel and honey.

The following are several recipes you can make using lungo in the mix. Try them and tell which one is the closest to your liking, but keep in mind that all recipes below need a machine by Nespresso. 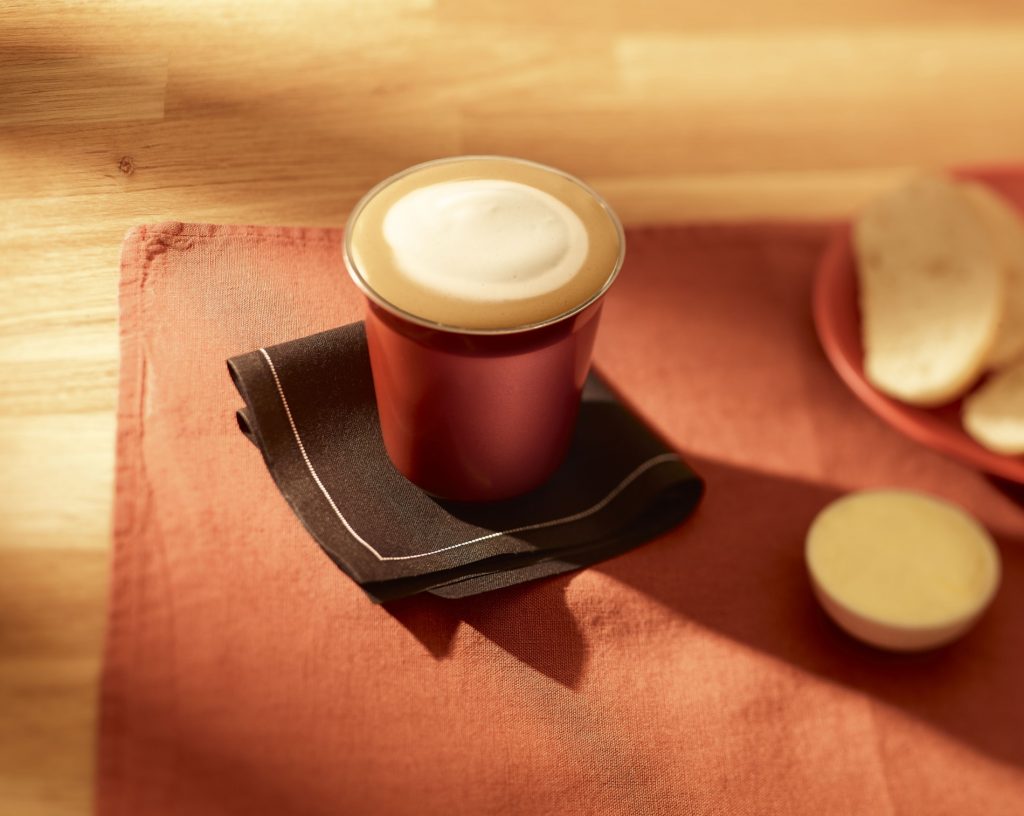 When mixed with a macchiato, lungo becomes rounder yet the strong character is still intact. Prepare 100 ml of milk, a Lungo capsule that fits 110 ml, a glass, and an Aeroccino machine. You only need to do a super easy job to make it.

Heat the milk with Aeroccino so that it forms some foam. Put the capsule in a cup, add the hot milk in, and it is ready to serve. 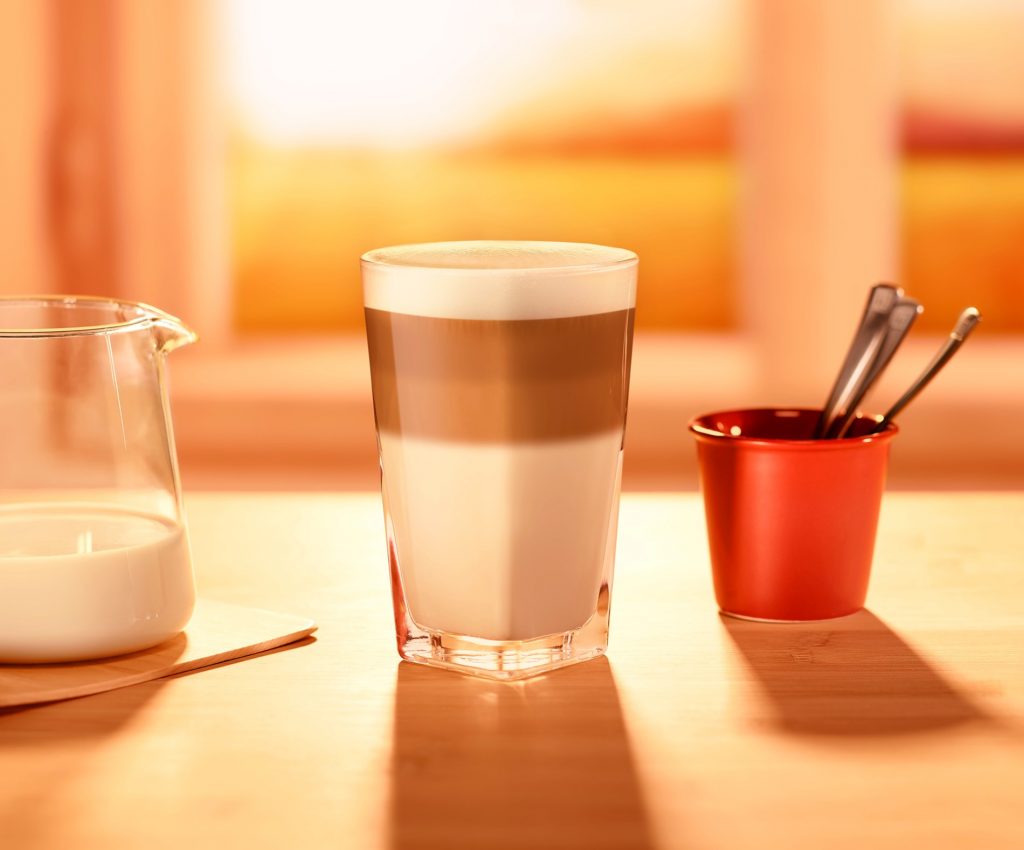 When sipped as con Leche, lungo becomes more balanced and rounder as well as provides a texture of silky. You can taste a good sweet-salty toffee and its strong character altogether. All you have to do is prepare 180 ml of milk, a Lungo capsule, a glass, and an Aeroccino machine.

Heat the milk in Aeroccino until some foam is formed. Fill a glass in with the hot milk but leave the froth behind. Extract your capsule carefully on the top and finalize it with the remaining milk foam. Then, it is ready to consume. 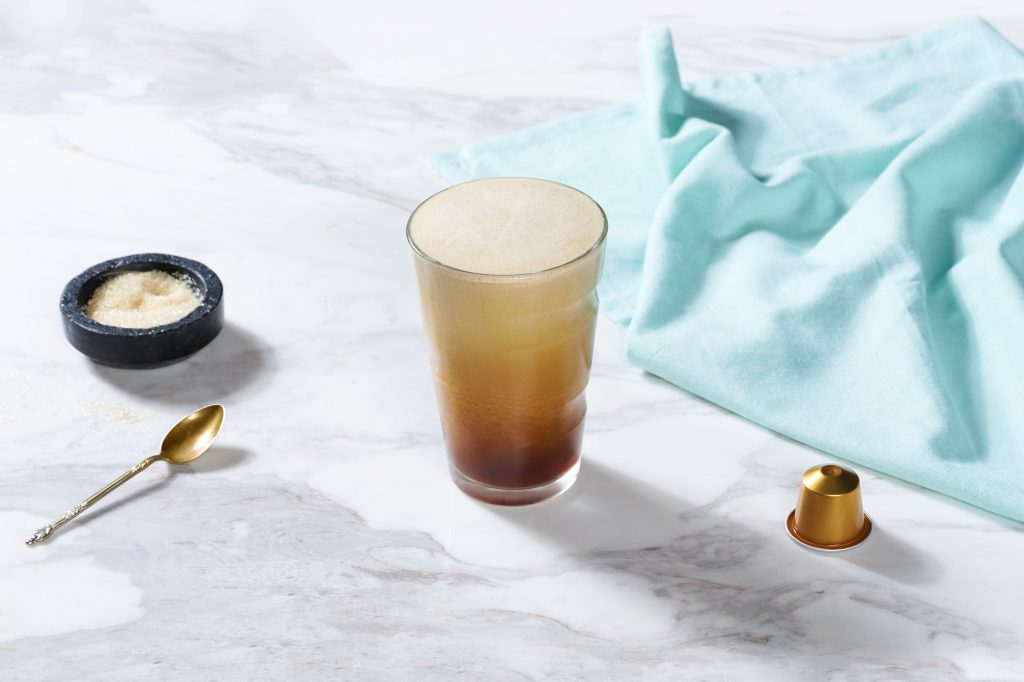 Iced lungo will cool off your hot days. It tastes sweet, soft, and refreshing. You will need 90 grams of ice cubes, 4 grams of white sugar (optional), a capsule, 100 ml of cold water, a glass, ice tray, Nespresso coffee machine, a spoon, and Nespresso barista.

Step one. Fill in the jug of the barista device with water until it reaches the lowest level marking. Add sugar and the ice cubes after that.

Step two. Extract the capsule using the coffee machine and add it to the jug.

Step three. Cover the jug using the lid, push the start button, and wait until it is all set.

Step four. Serve in a glass and your iced lungo is ready to consume! 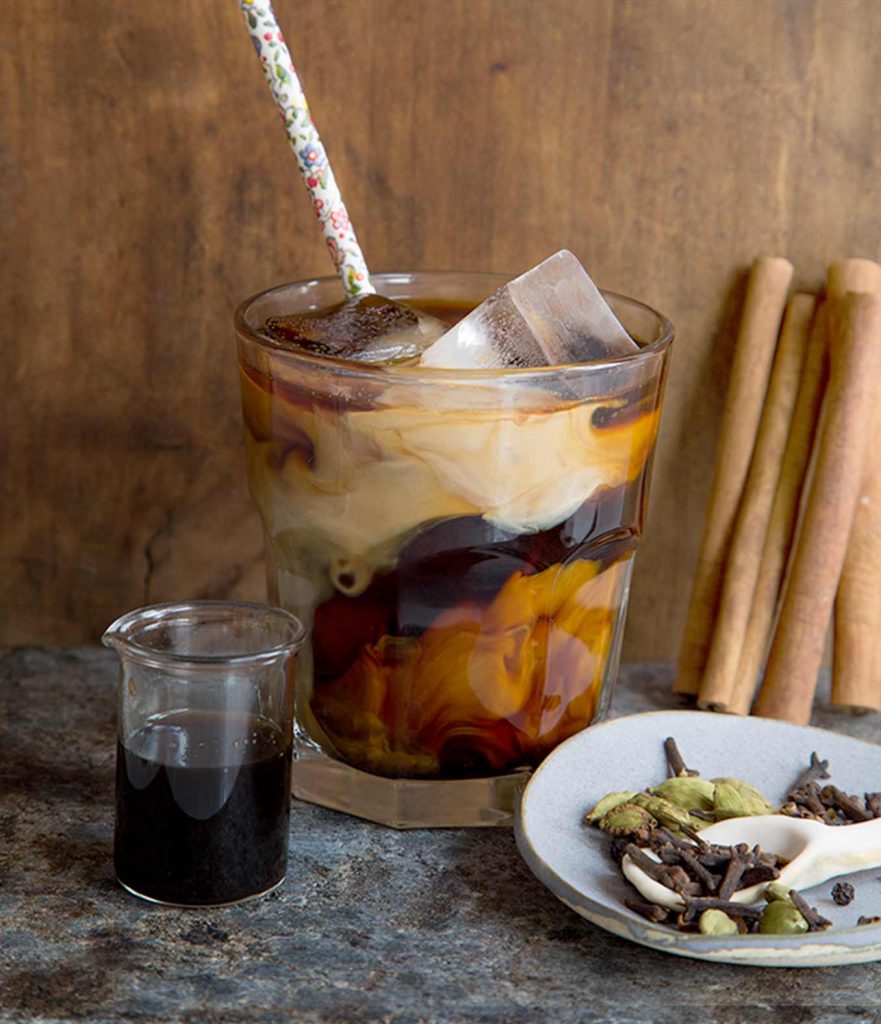 This recipe is perfect for those who like their coffee watery, sweeter, refreshing, yet still tastes strong. The requirements are Nespresso Latissima machine, cocktail shaker, mug, Fortissio Lungo capsule, crushed ice, and condensed milk.

Extract the capsule first to be 3.7 oz coffee. Fill the cocktail shaker with crushed ice, condensed milk, as well as hot coffee, and then shake them for about 10 seconds. Serve it in a mug and you are all set!

Lungo is a way to enjoy the signature bitter flavor every coffee drink should have. From a cup of it, you can make Americano by adding hot water and other espresso-based beverages, like cappuccinos and lattes. If you have not tried it yet, a chance to sip an interesting type of caffeine is about to be missed.