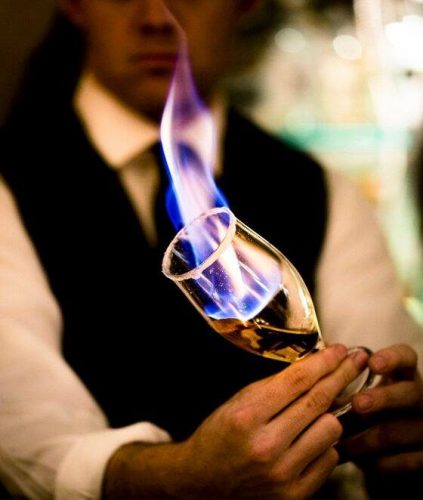 While most brewed coffees provide freshness in the morning and nights, the Spanish Coffee recipe will give you a stronger boost than just plain caffeine. That’s right because this cocktail recipe contains a little bit of liquor as a substitute for creamer and sugar.

Before you read any further, let us remind you that this Spanish Coffee is for adults. If you are old enough to drink alcohol then this is perfect for keeping you warm in a short period of time.

What is Spanish Coffee?

Spanish coffee is a type of coffee cocktail that has two main compositions: coffee and hard liquor (usually brandy or rum). The warm and bitter sensation is perfect for raising your spirits when staying up late on a cold night.

This drink is actually inspired by the traditional Spanish drink, Carajillo. It is a hot coffee drink to which a little bit of hard liquor is added.

A Carajillo is known to have originated in Huber’s Cafe in Portland, Oregon in the 1970s. It’s usually made with brandy or rum and served in small glasses. It is a typical drink of Spain and some Latin American countries.

This Spanish coffee has many variations that are loved and popular in America. Because after all, this Cocktail comes from Huber’s Cafe in Portland, Oregon.

Although it looks different from the traditional Carajillo because it added with a little extra touch (ex: whipped cream). However, this variation of the drink always includes its two main ingredients.

Intrigued by the taste? I don’t think you need to make a special trip to Oregon. Gather a few ingredients and take a few steps, and you’ll soon be sipping this refreshing drink.

The History of Spanish Coffee

Spanish coffee is a product of the transatlantic recipe movement. His journey began when Cuba was still a Spanish colony, where it is said that the Spanish army took the Carajillo into battle. They make cocktails with their own recipe, which is mixing coffee and rum to increase courage when fighting.

When Spain succeeded in invading all of Central and South America, the Spanish coffee recipe also spread as far as Mexico and Colombia. This shows that the oldest restaurant in Portland, Huber’s Café was not the inventor of Spanish coffee or the Carajillo.

In fact, the third generation of Huber’s Café owner, Jim Louie, took the cocktail recipe from Fernwood Inn, a bar in Milwaukee, Mexico. He brought the drink to Portland in 1975.

Jim Louie, however, created the flaming cocktail spectacle. And it is thanks to Portland’s oldest restaurant that coffee cocktails have become popular and become an institution.

If you now come to Huber’s Café to order a Spanish coffee, you can simply pay around $ 11 for an exotic liqueur accompanied by an incredible spectacle of flaming cocktails.

When you browse the internet for Spanish coffee recipes, you will find tons of variations on Spanish coffee. But one thing that makes Spanish coffee famous is the style of preparation that has dramatic visuals.

This drink is often known as “Flaming Spanish Coffee“, the use of rum in large portions allows it to be lit by fire. We are going to share this flaming Spanish coffee recipe with you for you to try at home.

Caution: If this is the first time you have lit an alcoholic beverage on fire, be careful. Keep children, pets, and flammable objects out of the kitchen area when you do this.

To Rim the Glass:

For toppings or garnishes, you can choose one or mix it according to taste:

Variations on How to Prepare Spanish Coffee

There are several ways to serve a Spanish coffee or a Carajillo, even in Spain itself has different variations.

Spanish coffee in a typical version usually combines coffee and brandy in a 3: 1 ratio. This means that every three parts of coffee will be mixed with one part brandy into one glass. So what must be done to create this unique version?

First heat the brandy in a small glass or other containers, then put some coffee beans, lemon zest, and sugar or a small piece of cinnamon. Then all the ingredients are burned while stirring until the alcohol decreases slightly, which is indicated by mixing and increasing aroma.

After that, you can put it out by covering it with a small saucer of coffee. Meanwhile, you can prepare a glass of hot coffee.

The final step is to put all the ingredients in this coffee cup while they are still hot. You need to serve it very hot for the coffee and alcohol to mix well.

In Catalonia or Catalunya, this Spanish coffee is served in the simplest way. There, people only prepare a glass of regular coffee and add brandy (which is not burned first). They usually provide sugar on the side, so you can add it to your liking.

There, the cocktail is prepared by pre-burning some of the alcohol in the glass, along with coffee beans, a piece of lemon zest, sugar, or cinnamon. And it turns out that this version is preferred by cocktail bars and high-end restaurants when it comes to serving a more upscale version.

In the American version, Spanish coffee is served more creatively. Then how do they do it?

After that, they burned the drink to caramelize the sugar. then they put out the fire by adding 2 ounces (57 g) of liqueur coffee. Finally, they’ll add 3-4 oz of coffee, and cover it with whipped cream.

In Mexico, Carajillo or Spanish coffee is served in a slightly different way, both in terms of ingredients and way of presentation. They usually make these cocktails using espresso ingredients and a sweet, vanilla-citrus liqueur (“Licor 43”).

In addition, this drink is also served in cold conditions, by pouring it over ice in a short glass. This drink is usually used for digestion after eating.

The serving of Spanish coffee is inseparable from the spectacle of the fire burning in the liquor. Because it is the caramelized sugar technique in drinks.

What you have to pay attention to is the glass that you will use. When you light a fire on glass or other glass material, you must first make sure the material is fire resistant. You don’t want the fire to crack the glass and even crush it in your hands.

Experts recommend that you use a red wine glass or Irish coffee glass. They have been tested to withstand fire and high-temperature heat.

Hold the stem while you light the liquor on the fire, and keep it away from your face. The reason is, the fire has the potential to rise before it goes out instantly.